Though Twitter is still the third-most popular social media platform according to eBizMBA, speculation about the company’s struggles abounds. News outlets from CNN to Wired to TechCrunch to The Verge have detailed Twitter’s struggles to grow its user base, increase advertising revenue, and innovate new products.

Still, Twitter’s best days may be ahead of it. First, it occupies a unique position among the leading social networks: Facebook is for family and friends, LinkedIn is for work, and Twitter is for news. No other platform can match its brevity and immediacy for amplifying breaking news and fresh content.

Second, it has unique features, such as Twitter lists, which can be very powerful for marketers if used strategically.

And third, it has possibly the largest and most diverse range of third-party tools that enhance the platform, from apps for Twitter analytics and follower management to brand monitoring and influencer research.

There’s no shortage of ideas for what Twitter needs to do to survive, like finding ways to block harassment and dumbing down the service for new users. But here are three ideas for relatively low-hanging fruit type changes that capitalize on what the platform already does well rather than reinventing it.

The UK’s agency:2 has one a fantastic job of comparing the ad targeting options on Facebook, Twitter, and LinkedIn. Here are Twitter’s options: 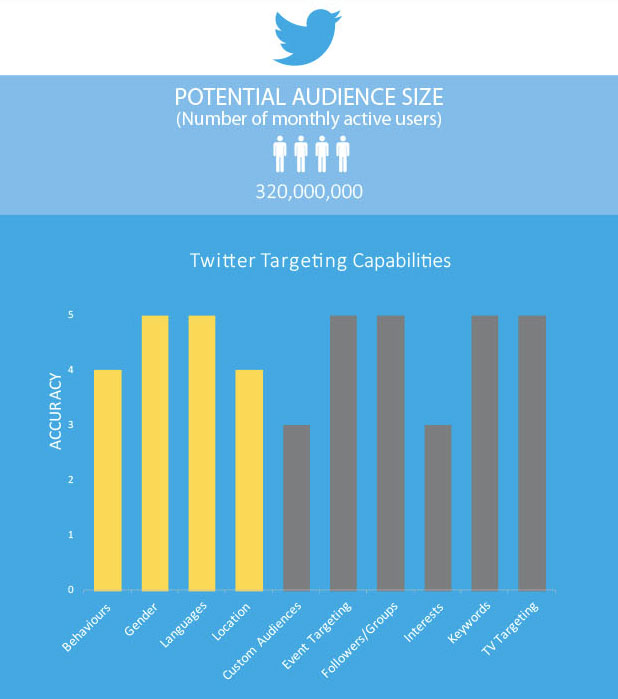 Compared to the targeting capabilities of both Facebook and LinkedIn, Twitter’s options are sadly rudimentary. The three big gaps that stand out, for B2B marketers in particular, are targeting by industry, company, and job title. The other platforms also offer targeting by age, degrees (level of education), and alma mater.

Expanding some of the basic information it collects from users would have dual benefits: it would improve ad targeting capabilities making ads more relevant to users (a win for both advertisers and users) while also enhancing the ability of Twitter to crack down on trolls and abusive content.

Twitter’s search capabilities offer ample opportunities for improvement. Name variants are one example: do a Twitter people search for “Elizabeth Smith” and you’ll find lots of accounts under that name. But Twitter won’t show you accounts for Eliza, or Liz, Lis, Beth, or Betty Smith. Google is often more helpful for finding Twitter accounts when you don’t know the exact name.

Also, mistype a user’s Twitter handle by a single character and you’ll get a “Sorry, that page doesn’t exist” message rather than a helpful “Did you mean…” type suggestion.

Advanced search isn’t much better. It suffers some of the same limitations as ad targeting (e.g., the inability to search by users’ company, role, or industry). But it also doesn’t permit use of Boolean strings or filtering of searches by following or lists.

Even Twitter’s handling of hashtags—a core element in topic research and monitoring—is sketchy. One can search by hashtag and see top trends, but little beyond that. Fortunately, outside tools like Hashtagify.me show related hashtags and their relative popularity.

Upgrading its search capabilities would make Twitter much more useful and powerful for marketers, recruiters, researchers, and even casual news searchers.

Lists are a valuable feature of the platform, but so much more could be done with them. They are great for recognizing special people or organizations, keeping tabs on a topic, or filtering your tweet stream. But you can’t tweet only to the members of a group, or use groups in ad targeting.

Twitter doesn’t even make it easy to find groups. You can’t search for them in advanced search. Aaron Lee has written about creative ways to find Twitter lists, but the process needn’t be this convoluted.

Of course, “top” lists exist outside of Twitter as well, but these are even harder to find. This is more of a Google problem than a Twitter deficiency (perhaps they could collaborate on a fix?), but a search using the Google search wildcard operator—”top * on Twitter”—results in almost nothing of value. One would expect it to find helpful external lists like Chuck Martin’s Top CMOs on Twitter, the Top Colleges on Twitter, the Top Airlines on Twitter, and the Top Musicians on Twitter.

The online world would be a slightly quieter but far less interesting place without Twitter. Where would people go to announce breaking news? Amplify share-worthy blog posts? Complain about crappy service? Or to complain about Facebook? How would the U.S. president announce important 140-character policy initiatives at 5:00 a.m.?

Hopefully Twitter will heed the voices of its fans and continue to add value and utility to its platform in smart, differentiating ways.

This article was first published on Webbiquity.com